October 2019. Roadtrip with Laxman our trusted driver and friend. 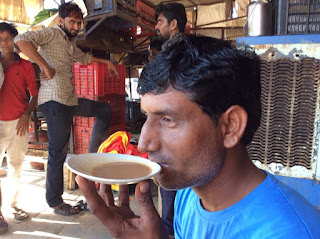 Laxman has been with us for many days, a full-on road trip. He has been our trusty driver, our bodyguard, our luggage minder, our friend and translator.

I have been reassuring him, “No worries, I know the way, straight straight”, only to find that roads have changed, buildings have shot up everywhere and consequently, we have been lost a lot! He has stopped again and again to ask the way — again and again we have been misguided. It is better to tell a white lie and send people on their way in the wrong direction than it is to lose face and say you do not know! We know to ask a few people, to get a proper overview, or a rickshaw wallah. Laxman has carried my bag, plugged in my tablet and reminded me to not leave it behind. He has taken our photos for our social media posts, remembered the way when I have had to go back, helped me with exceedingly difficult negotiations, watched me write long stories whilst sat beside him in his passenger seat. He has worried about Ella’s safety, declared he would beat anyone who tried to touch her, asked privately about her bunion and worried about her stomach problems and mosquito bites. He has brought us chai, fetched lassie and bananas, dealt with numerous phone calls from home, whilst his friends and family have been calling him for money he does not have, and for worry he doesn’t need in equal measure. 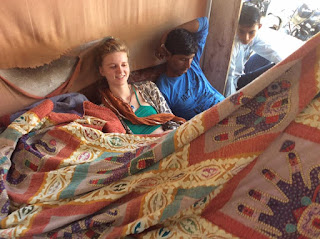 He has been ready at 7am, to drive or sit with us in numerous mud huts and workshops until 10 o’clock at night. He has loaded and unloaded piles of heavy cloth, he has untied bundles to squeeze more into the car. He has checked I have all the bill copies and he has worried about the police. He has laughed and told me not to cry!

He has dealt with a thousand people asking who we are, where we are from, why we do not have any husbands, brothers or fathers with us. He has dealt with lots of suspicious enquiries about him, what he is doing with us, where he is from, how much he earns. He has fought in the government offices with us, patiently waiting for the right papers, respectfully answering their questions. He has quietly told me to cool down when I have needed to be told.

He has helped us prepare bank drafts in the banks, from one desk to another and back again, and again. He has slept in mud huts — slept in bunk beds with other snoring drivers in dormitories, who play their mobile phone music too late, whilst we have slept in palace rooms — had cold showers when we have had buckets of hot brought to us. He has eaten from cheaper menus out the back whilst we pay different prices out the front and he has sat with us eating drinking and sharing life stories, noticing things on the bill we should not be paying for!

We have picnicked under trees in the countryside, marvelling at the beautiful views. 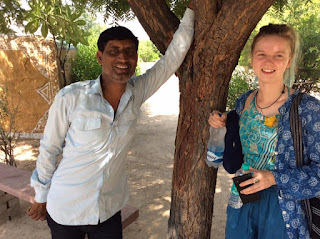 He has worried that he has kept us waiting for 15 minutes whilst he has patiently waited hours for us. He has cleaned the car and checked the tyre pressure, avoided the potholes, filled up in cheaper areas, driven over the sand skilfully, navigated around piles of rocks on the dark road, around crazy, road safety unaware folk, driving, and been ready to drive or stop wherever we ask.

He has been treated like a king by some and very differently by others. Some of the barriers in society in Rajasthan are hard to comprehend, between men and women and from caste to caste. We fit in somewhere here and there, in different ways in different places, and we stand out like sore thumbs in other places, dressed wrong, behaving wrong, just being alone and female is a big thing, let alone foreign and white. Laxman has been our constant bridge and for that he has become our hero and heartfelt friend, and for that I am incredibly grateful.

As we drive away, out of the desert to different worlds, and think of onward journeys, stopping to say bye bye along the way, my heart swells and big tears well and drop. 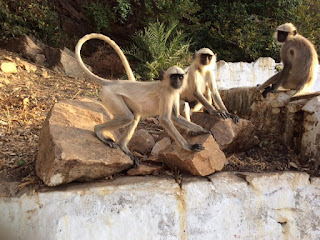 There is never a dull moment, including for Ella, even when fast asleep, supposedly locked in her dark room at the end of a long corridor. I was in my rooftop room, locked in, with the rooftop door also locked up for the night. It was mid-morning and I was awake and had been suffering from the early hours with terrible diarrhoea and sickness. I am not normally sick, but yesterday was exhausting, 39 degrees and I am not sure what I ate, but something! Normally these bugs are evacuated quickly from my body and I am fine again the next day. Suddenly the phone rang and the man from reception asked me to unlock the roof and leave the door open. A monkey was in the stairway and they were chasing it up and out. I pulled myself up and duly opened the door. I spotted the monkey sitting on the stairs and I retreated to my room, closing the door behind me so he could not come and visit. Soon the lads from the hotel came onto the roof and chased the money away, onto someone else’s roo 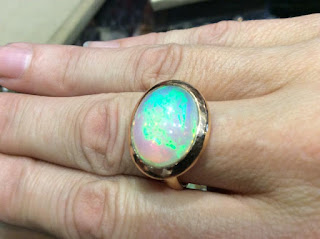 I am on the road again, after just three hours sleep. I have watched the sun rise over the pink city of Jaipur as I have sat in the car, on my way to the airport in Delhi. We had a crazy day yesterday, my last day here. It was a typically remarkably busy last day for me. Other buyers I know, and love seem to have everything together by the end of their trips, sometimes calmly doing yoga or gloatingly swimming on their last day. That is something I have never been able to achieve! The work for me here is a never-ending ongoing process and is never actually done! So, I started the day with an early morning visit from a jeweller who I had to pay some money to, for someone else. He lingered politely hoping that I would miraculously give him an order straight out if mid-air, so I explained that my main business was clothing and that was that. We hired a rickshaw for the morning to take us round about in town to various gemstone suppliers and to two jewellers. The first was a whis